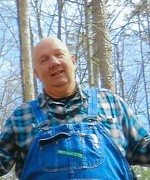 He was a graduate of Rochester High School Class of 1970. He then served his country during the Vietnam War serving the United States Air Force. He also was a member of the Tippecanoe Masonic Lodge 492.

Charlies was retired from the Security Dept. of IU Health-Arnet Hospital, Lafayette, IN.

Charlie was a avid hunter and gun enthusiast. He enjoyed the times having coffee and visiting with the fire department.

Funeral services will be held on September 14, 2019 at 1:30 p.m. in Whetsel Funeral Service, Alexandria with Rev. Dale Watson officiating. Burial will follow in Forestville Cemetery, Summitville with Military Rites provided by Elwood VFW Post 5782 and the United States Air Force. Friends may call at the funeral home on Friday, September 13, 2019 from 4:00 p.m. to 8:00 p.m. and one hour prior to the service on Saturday.

In lieu of flowers, the family requests memorials to the Alexandria Firefighters Local #1649 Flower Fund, 212 S Harrison St., Alexandria, IN 46001 or in care of the funeral home.
.
Whetsel Funeral Service is honored to care for Charlie and the Wallace family.